Killarney Historic Rally.
Last weekend saw the running of the last rally of 2017, the Rentokil Initial Killarney Historic Rally, based over 8 classic stages with the last stage ran in the dark.
There were 4 club crews in action in the modified section of the rally.
Allen Treacy and Eoin Treacy in the 1600 corolla finished 4th in class 5 and 20th overall after the days rallying.
Donal McGrath and Finbarr Fogarty were competing in class 6 and brought their corolla home 10th in class and 38th overall.
Emmet Cronin was lying 4th in class 3 and 25th overall until he was forced to retire his Mk2 on stage 7.
Martin O’Brien made the switch to an escort for the day and with Mossie Griffin on the pacenotes the crew made a good start but were forced out of the rally with crank sensor issues.
📷 💥 Sheals Photography💥📷 & Gary Nolan Photography
Last week saw the annual running of The Fastnet Stages Rally in Bantry,
Many of our club members made the trip down for the last round of the national championship.
Jason Ryan was the highest places club member and he came home 8th overall and 1st in class 11F after a superb spin.
Anthony Roche and Padraig Walsh brought the unique Audi A3 home to 2nd in class 20.
Garry Kelly finished 4th in class 1 after 8 stages in the slippery conditions.
In the Junior Rally Barry Archer and Eugene Cronin finished 8th.
Diarmuid and Mike Hallahan were next up in 9th position.
Aaron McEvoy and Dylan Mullane rounded out the top 10 in their civic.

15 Club crews take part in The AceSigns Cork 20 Rally in 8 classes
Class11F
Jason Ryan took the class 11F honours after a dramatic weekend which saw his hopes of a class podium dashed when he was forced into Rally 2 early on Saturday However some very quick stage times saw him take the class lead on Sunday Evening. James Fitzgerald and Mossie O’Connell were 2nd in class when they were forced to retire with mechanical Issues before the last stage Saturday evening. The Demise of James and Mossie saw Jamie McCarthy and Donagh Hurley move into 2nd in class overnight however they were caught out by the slippy conditions Sunday morning and retired.
Class 11R
With 3 club crews entered in class 11R the stage was set for a big battle among the Imokilly crews. Michael Murphy and Patsy Cashman took the lead from the start and held this position for the entire weekend. Allen Treacy and Bob Fitzgerald saw their chances at class honours slip away on the second stage when electrical problems forced them to retire and re-join the rally under Rally2. Meanwhile William Walsh and Carol O’Keeffe also lost time after getting their corolla stuck on the first stage. Sunday saw all three crews battle it out problem free. Mike and Patsy used their large cushion from Saturday to their advantage as they held off Allen / Bob who finished 2nd. William / Carol had held second until they retired on the last stage.
Class 12
Emmet Cronin made the move to class 12 for this Rally and an impressive drive saw him take 1st in class by a margin of almost 5minutes.
Class 13
In Class 13 William Kenneally and Finbarr Fogarty were the sole IMC representatives in this hotly contested class. William and Finbarr had an impressive result to finish 3rd in class 13 after the tough 16 stage event.
Class 14
Mark Dolphin was the sole Imokilly member in class 14 and was lying 5th in class before he retired after stage 6
Class 22
Another class dominated by Imokilly Crews was Class 22, Martin O’Brien and Brian McCarthy brought their C2 home first in class. Garry Kelly and Pa O’Mahony came in second on Garrys first Rally!
Class J1
Aaron McEvoy and Dylan Mullane were competing in class J1 and after the weekends rallying they finished 2nd in class.
Class J2
In class J2 Barry Archer and Eugene Cronin had a great run to claim 3rd in class, Pádraig Walsh and Aaron O’Regan brought their Corolla home 5th in class. Diarmuid and Mike Hallahan finished 6th in class.

Great weekend for our club crews in the West Cork Rally which was ran in tricky weather conditions and included a night stage also.
In the International Section of the rally Kevin Dolphin and Martin OBrien finished 22o/a and 2nd in class 3.
In the national Rally Mark Dolphin nad Colin Fitzgerald finished 9th o/a and 2nd in class 14.
William Keneally and Finbar Fogarty finished 18th o/a and 10th in class 13.
Jamie McCarthy and Donagh Hurley finished 25th o/a and 2nd in class 21F.
Cormac Smiddy and Christopher Robinson finished 39th o/a and 4th in class 11F.
Not so lucky were Jason Ryan and Finbarr Quirle who ran into engine trouble on stage1.
In the Junior section of the Rally Padraig Walsh and Michael O'Halloran finished 12th on their first event in their Corolla. And in 13th we're Diarmuid and Mike Hallahan. Unfortunately Killian O'Brien and Keegan O'Farell didn't finish along with Aaron McEvoy and Johnjoe Williams
Well done to our Junior Club members Kilian O'Brien and Aaron McEvoy in yesterdays Birr stages rally.
The lads finished 4th in the Juniors in very slippy winter conditions.
The opening round of the Valvoline National Forestry Championship in Carrick on Suir.
Club members Sean W Benskin and Joe Fitzgibbon finished Third in class 12 in their Mk 2 Escort despite early electrical problems.
Also competing were Cormac Smiddy and Ashley McCarthy who were looking to gain experience in the forest but unfortunately a finish wasn't to be today and they retired their 106 on stage 4 but hopefully we will see them out in the woods again soon.
Next up is the Birr Stages Rally in two weeks time which will see more of our club members in action. 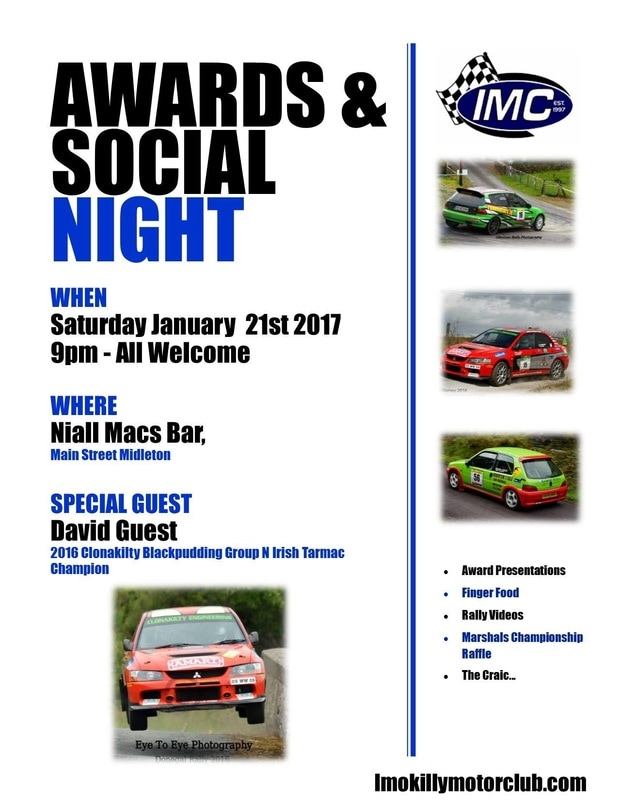 I'm Going
RALLY MARSHAL SEMINARS
The Rallies Committee are holding a series of Safety Information Seminars for Marshals throughout the month of January 2017. All marshals are requested and encouraged to attend one of these seminars either in their own club area or any other area they may find more convenient.